Dr Marren explains the process of an IVF cycle.

Fibroids are common benign tumours affecting the uterus. They are present in about 20% of premenopausal women.

Fibroids are usually diagnosed by ultrasound but are also sometimes found incidentally during CT or MRI scanning.

Broadly speaking there are three main types of fibroid classified by where they are positioned within the uterus. Submucosal or intracavitary fibroids project into the inside lining of the uterus and commonly cause heavy menstrual bleeding and issues with fertility. Intramural fibroids are found within the muscle of the uterus and when large can cause heavy menstrual bleeding, issues with fertility or pressure symptoms. Subserosal fibroids are found on the outer surface of the uterus and sometimes cause pressure symptoms but most commonly cause no symptoms. 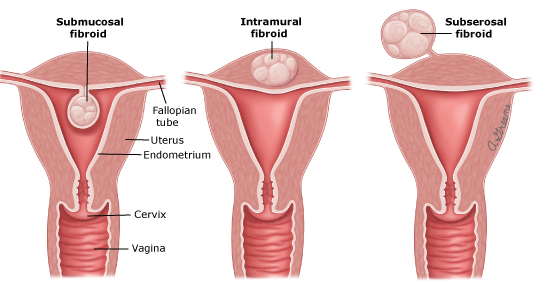 If fibroids are not causing any symptoms, they do not usually require treatment.

The treatment of fibroids depends on the symptoms they are causing and whether or not future fertility is desired.

Hysteroscopic removal of fibroids is achieved by passing a camera through the cervix and into the cavity of the uterus to then remove fibroids. This surgery doesn’t require any incisions on the skin and is commonly performed as a day surgery procedure.

When large intramural and subserosal fibroids are causing symptoms they are usually removed through an incision in the abdomen or with keyhole surgery. This type of surgery usually involves 2-3 nights in hospital and a recovery period of up to 6 weeks after surgery.

When patients have fibroids causing significant symptoms and do not want to have children in the future then a hysterectomy can be performed either with keyhole surgery or through an incision in the abdomen. Menopause does not occur after this surgery as the ovaries are usually left behind.

Other treatments for fibroids include: